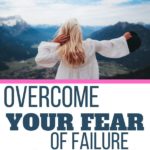 When it comes to achieving your goals sometimes taking action can be the hardest part. You can have everything perfectly planned out, but if you don’t actually put that plan into action then your goal will be just that–a goal.

It will never be your true reality. But at that point when it is time to take action, it seems like there is something that stops you just short of taking those first few steps. Learn how to overcome your fear of failure and go for it!

Today I want to talk about some of those thoughts that creep into our mind when it’s time to take action. I think, for me, and I’m guessing most people, it’s fear. I’ve had all of these fears before and I know they have held me back at certain times from going after my goals.

I also wanted to provide some tips on how to move past those fears so we can start putting our plans into action and making those goals a reality!

Fear of the Unknown

I think this is something everybody struggles with in their life. The fear of the unknown means you don’t do something because you’re not sure what will happen when you do. What if it doesn’t work? What if that person says no?

How will my life change if I do this? What if this or that happens? What if I’m not good enough to do xyz? There could be a million and one thoughts running through your head that would make you second guess what you want to do.

Solution: Just Do It

You could sit and talk yourself out of doing pretty much anything and where would that get you? Nowhere. You will still be stuck doing the same old thing you’re doing right now. My husband has wanted to move up in his career for years but hasn’t because he has to take a test in order to move to the next position.

He has horrible test anxiety. He knows everything he needs to pass the test and he can do that job better than most, but he won’t take the test because he’s afraid he will fail it.

In order to move past this fear, you have to know that if you never try then you will never get where you want to be. Sometimes things don’t always work out the way you want them to, but at least you tried and now you know. And what if you try and it works out in your favor? How awesome is that!

We went through some extremely difficult times during the economic recession back in 2010. For some reason, we thought it would be a great idea to quit our jobs and move to another city. Boy, were we in for it! I wasn’t able to get a job for over a year.

We barely scraped by each month. Some weeks we only had $10 or $20 to buy a week’s worth of groceries. The debt was piling up. It was one of the hardest times of my life. Even though we are now in a way better place almost 10 years later, those fears still creep into my mind.

If you feel like you don’t have enough of something, plan it out. If you have a goal that you want to achieve, break it up into smaller steps with an action plan.

When you have a plan in place that shows how you can reach that goal and the steps to get there, that overwhelming fear goes away. You can actually see the process and that you don’t have to have everything all at once, like a ton of money or time.

You may feel that because you don’t know how to do something you won’t be able to go after your goal. Maybe you don’t have the education or you don’t understand how something works.

Depending on what you’re trying to do, you’re going to need to make time to learn it. That doesn’t necessarily mean it’s going to be years before you are able to go for your goal, but sometimes it does.

If your dream is to become a doctor or a nurse, it’s going to take several years of schooling to get the degree necessary for those jobs. What if you want to be a photographer. This would take much less time. But you still need to learn how your camera works, how to take good pictures, how the lighting affects your pictures and so on. You will need to practice to get to a point where you are good at taking awesome photos, and that takes time.

A common reason why a lot of people don’t ever try to do something is the fear of rejection. It probably starts back in middle school when you start to like someone and you’re afraid they won’t like you back and then it goes from there.

Understand that not everything will always work out the way you want it to, but if you never try then you will never know. So you need to weigh the pros and cons. Sure you might not get what you want the first time, or that person may say no. But that doesn’t mean you stop trying.

For example, you need to make more money from your job so you ask for a raise, but your boss says no. Well, maybe it’s time to find a new job that pays you more. Just because it didn’t work out the way you planned, doesn’t mean it’s over. Be open-minded to try different tactics or explore different avenues to get you to the same goal.

Sometimes it can be hard to move past a fear that is holding you back. If we can remember that these thoughts are coming from a place of fear, then we can understand that they are not our true reality. Take those first few baby steps and you will get the momentum to take off and turn your goals into your new reality.

Create a Road Map to Your Goals

A Step By Step Action Plan to Reach Your Goals

Want to remember this article “Overcome Your Fear of Failure and Go For It!” save it to your favorite Pinterest board.